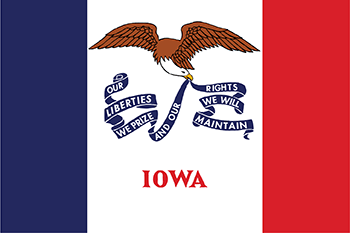 Iowa passed House Bill 650 (HB650), which creates limitations on liability for private employers that hire people with criminal histories, unless such hiring is deemed to be negligent. The bill states that a cause of action shall not be brought against a private employer, general contractor or premise owner that hires an employee, agent or contractor who has been convicted of a public offense.

However, there are scenarios in which this limitation is not applicable. For example, if the person was convicted of:

Iowa currently does not have a statewide Ban the Box law. These laws are designed to give individuals who have minor criminal records a second chance at employment, reduce the rate of recidivism and expand the applicant pool for job seekers.

Numerous states have passed these laws and additional states, such as IA, could implement their own. If so, the team at Backgrounds Online will update this page so it has the most current and accurate information possible.

Employers may request criminal records on job seekers but only after receiving writing authorization. Any fees charged for criminal searches must be paid by the employer and not passed on to the applicant.

View Bill
Backgrounds Online provides details about State Laws for informational purposes only. We do not provide legal services. Nothing on these pages or our site should be considered as legal advice or opinion.